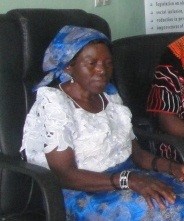 “Mami” Margrette Fongwa  (76 years old) of Acha joined the CDVTA elderly group with her loneliness troubles – her husband had died and children’s upkeep was not easy. Some people and relatives of good will gave her a helping hand. In the Mbengab Older People’s Group, she saw herself in the company of many people with a great solidarity put in place.

Due to her openness and outspoken nature, she was chosen by her group to represent Momo Division as demanded by CDVTA authorities as part of a fourteen-man delegation to meet with the Prime Minister and Head of Government in Cameroon’s capital city of Yaounde.

During the Bamenda Regional Older People’s Convention in 2012, she was opportune to express her feelings and talk about the impact of CDVTA on the rural elderly to a large crowd of 25,000 people in attendance. She had not imagined that she, being a poor widow in a remote rural setting, would meet with the Head of Government or address a large crowd like that one anytime soon.

“How I wish my husband was alive to see me greet the Prime Minister of Cameroon with the cracks in my palms? Thanks to the founder of this organisation,” she says.