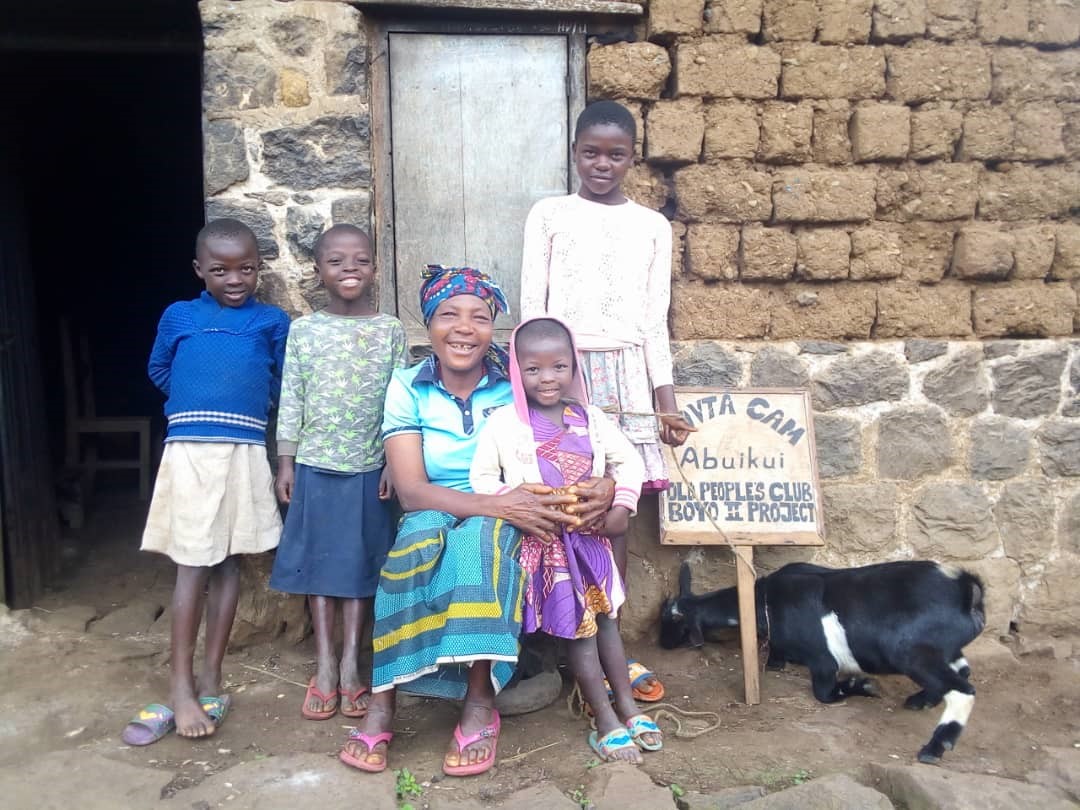 Among the many older people whose lives have been impacted by CDVTA, Nasah Monica’s story is an example of how a small initiative can change the entire course of the life of an individual.  At 68 years of age, Monica is an active member of the CDVTA older peoples group in Abuikui, Abuh village in the North West Region of Cameroon. Being the 5th wife of her husband, she spent most of her early married life as a farmer, struggling to earn a living and support her family in the process. This was very hard to achieve, considering how large her family size was and how little yields she made from her farming activities.

Things became worse over the years for Monica since she lost her husband 38 years ago. He died leaving Monica with a very large family to support (7 children and 20 grandchildren) and the traditional customs at the time did not give women any pride of place in society, especially widows. Life was very hard for quite a long time as a widow and she had to work extremely hard in order to feed and support her family.

When CDVTA started supporting projects in her community in 2011, with the support of All We Can, Monica was one of the few women who were encouraged to join the group. She was quite enthusiastic about CDVTA’s activities and was very interested in learning new things. As a result, she became fully involved in the group activities and was very keen on learning from the trainings carried out by CDVTA. By 2013, she had established her own personal medicinal plants garden and continued to cultivate medicinal plants like yarrow, comfrey, mint and Artemisia. With knowledge gained from trainings on medicinal plants and ointment production provided by CDVTA and with a small loan obtained from her group, Monica began producing ointment on her own.

This ointment helped to remedy minor ailments suffered by many people in her community. The sale of the ointment enabled her to buy more inputs for ointment production and buy more seeds for her farming and gardening activities. She then quickly established her own vegetable garden where she has been able to cultivate and sell cabbages and carrots. In addition, Monica was able to purchase a goat which enabled her to engage in the CDVTA goat scheme which has supported hundreds of other women in rural villages in North West Cameroon.

The income generated from her gardening, ointment production and goat scheme have helped her support her family and her grandchildren. Monica claims she can now pay her grandchildren’s school fees and support herself financially. In her own words, she narrates this with a smile on her face “By means of the wealth of experience that I have gotten from CDVTA, am very comfortable with my grandchildren today”.

She currently lives with and supports 4 of her grandchildren who lost their parents a few years ago. When their parents died, the responsibility fell on her as their grandmother who was the only relation available to support them in school up until the socio-political crisis brought schools to a halt. Monica feels she is greatly indebted to CDVTA and All We Can in particular, whose support have changed her life completely for the better. She can now provide for and feed her grandchildren and her family and she now has a sustainable means of livelihood.